Zombies are reanimated corpses, brought back to life by magic. They are not to be confused with the Undead or Wraiths.

Liu Kang was an infamous example of a zombie in the MK series. Raiden, who was corrupted by his suicide, had used necromancy to reanimate Liu Kang's body as an enforcer of the dark thunder god's will. Raiden had then unleashed Liu Kang's active corpse to destroy those who Raiden believes have caused harm to Earthrealm.

Other zombies seen in the series would be the "undead" clan of Scorpion. The Elder Gods had promised to resurrect Scorpion's clan in exchange for his service to them as their champion. Unfortunately for Scorpion, the Elder Gods did not fully fulfill their promise as they had brought back the Shirai Ryu as animated dead. Infuriated, Scorpion vowed revenge against the Elder Gods. Scorpion attempted his revenge by sending his undead clan to kill Taven in order to ruin the Elder God's plans to save the realms from Armageddon. However, Taven was able to defeat the undead Shirai Ryu.

Stryker needs to shoot Zombies during the Challenge Tower.

Kratos as a zombie.

A photo of Liu Kang as a Zombie. 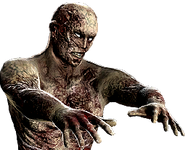 Taven vs. a bunch of zombies (MK Armageddon's Konquest Mode)
Add a photo to this gallery

Retrieved from "https://mortalkombat.fandom.com/wiki/Zombie?oldid=323220"
Community content is available under CC-BY-SA unless otherwise noted.