Yue Chuan is a style of Chinese martial arts attributed to Yue Fei, a noted general and patriot from the Song Dynasty. Legend claims Yue taught the style to his soldiers who passed it down for generations after his death. It contains mostly military-oriented attacks, and is based primarily upon the principles of combining internal and external techniques, theory, and application. Its various tricks stem from its principal philosophy of the positive and negative and the five elements of the heart, liver, lung, spleen and kidney in the human body. Tanya has learned this fighting style in Outworld. 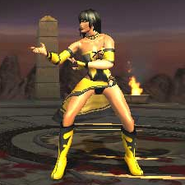 Tanya's Yue Chuan.
Add a photo to this gallery
Retrieved from "https://mortalkombat.fandom.com/wiki/Yue_Chuan?oldid=332712"
Community content is available under CC-BY-SA unless otherwise noted.