They are moves that cause a large amount of damage, comparable to "Super Moves" found in various other fighting games. True to their name, these moves consist of a short sequence of attacks that zoom in on the target with an X-Ray and displays bones and organs being crushed, smashed, dislocated, ruptured, and snapped, dealing massive damage. The player must completely charge up the Super Meter (which also includes various of more minor super moves) in order to perform an X-Ray Move.

While incredibly powerful, a few X-Ray Moves require special conditions to be met. For example, Johnny Cage (MK2011) and Sonya Blade (MKX) both have X-Ray Moves that are classified as a counter-attack, meaning that it is only performed if they are attacked within a few seconds of the player activating it. Other limitations include X-Ray Moves that can only be activated from an aerial position, such as Cyber Sub-Zero (MK2011), Takeda (MKX), and Tanya (MKX) and the fact that the damage inflicted by an X-Ray is altered based on the damage scaling.

In Mortal Kombat X Mobile, X-Ray attacks are unblockable and deal extreme damage and a Buff (to the user) or a Debuff (to the opponent) and is activated from a Gold or Diamond character in the game. X-Rays cannot be activated by Bronze or Silver characters. It takes all 3 Bars of Power for a Gold or Diamond character (Konqueror Shao Kahn can start with 4 Bars of Power if geared with his Helmet and Wrath Hammer) to perform their X-Rays.

A buff on an X-Ray for example is when Johnny Cage, Kung Lao, Leatherface and Kano's X-Rays give Strength to themselves and to their teammates. Other buffs include Regen (regenerates health), Dispel (removes debuffs), Shield (increases defense), Luck (increases critical chance) and Power (increases power generation).

In MK11, X-Ray moves have been replaced with Fatal Blows. Although they have similarities, they can only be accessed if the player is low health. Aspects of X-Rays also appear in Krushing Blows.

Shang Tsung's X-Ray: Your Soul is Mine 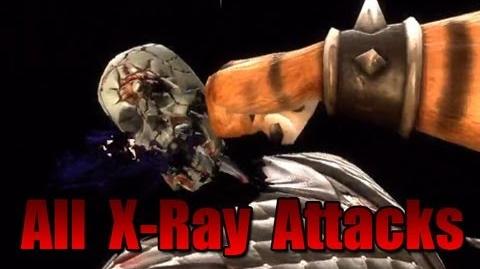