Cave
The Wu Shi Dragon Grotto is an arena that debuted in Mortal Kombat 11. It is located beneath the Wu Shi Academy, and also houses Earthrealm's Jinsei within the springs.

Deep underground beneath the Wu Shi Academy, and guarded by a dungeon filled with traps just outside its entrance, the Dragon Grotto is a natural cavern from which a spring of Earthrealm's lifeforce, the Jinsei, sprung forth. The monks of the White Lotus Society built an effigy of many dragons around the spring, some carved from limestone while more were carved from gold and have the spring pouring from their mouths, to honor the Elder Gods. Many students and residents of the academy above will bring tributes of gold, food, and other items to the spring in reverence of both Earthrealm and the Elder Gods, while the White Lotus Society protects the spring as one of their most well guarded secrets so that no one of evil intent may harness the power of the Jinsei for their own nefarious needs.

The Wu Shi Dragon grotto features arena interactions. In order they are:

Concept Render of the Interactabes on the stage. 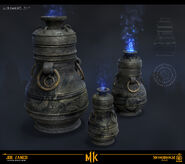