Mortal Kombat: Armageddon
Wu Lae is the leader of the Tengu clan located in Arctika. He uses a scythe in battle. His clan is a rival to the nearby Lin Kuei, but the two share an uneasy truce in which the Tengu remain out of the Lin Kuei's territory. In Mortal Kombat: Armageddon's Konquest mode, Wu Lae's clan attacks Taven, assuming him to be related to two other invaders that they had encountered earlier: Noob Saibot and Smoke. After Taven defeats the entire clan, Wu Lae cedes his attack, realizing his error. He then directs Taven to the Lin Kuei temple that he had been searching for.

Wu Lae is seen in the distance. 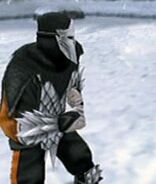 Wu Lae, after his entire Tengu clan had been defeated, surrenders and allows Taven to pass.
Add a photo to this gallery
Retrieved from "https://mortalkombat.fandom.com/wiki/Wu_Lae?oldid=360432"
Community content is available under CC-BY-SA unless otherwise noted.