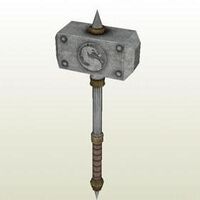 The Wrath Hammer is a maul of prodigious size, a long-handled hammer with a heavy metal head.

Shao Kahn's Wrath Hammer is far larger than historical mauls, such that its sheer mass would be massively unwieldy to anyone not possessing superhuman strength. The emperor is able to use the colossal weapon to devastating effect, as can be seen in the battle before the Pyramid of Argus, where he sent numerous opponents flying through the air with single blows. Shao Kahn wields his Wrath Hammer in all his appearances.