Wing Chun is a southern Chinese martial art that specializes in close-range combat. Tenets of Wing Chun include practicality, efficiency and economy of movement. Strikes are intended to injure or disrupt the target, using the least amount of required force in any fighting situation and taking the straightest possible path to the target (usually a straight line) to break the opponent's structure. Wing Chun was developed during the Shaolin and Ming resistance movement against the Qing Dynasty. Ip Man and Bruce Lee are some of the famous martial artists that practiced Wing Chun. 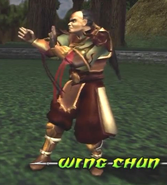 Wing Chun fighting stance
Add a photo to this gallery
Retrieved from "https://mortalkombat.fandom.com/wiki/Wing_Chun?oldid=310950"
Community content is available under CC-BY-SA unless otherwise noted.