This arena is sometimes referred to as "River Kombat" or "Kombat River". There is a collapsed bridge partially in the river, and a view of the city is in the background. The city is modeled after the city of Chicago, where the MK team is based.

Collapsed bridge at the Waterfront. 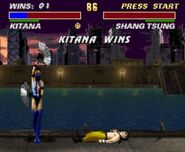 Shang Tsung defeated by Kitana at the Waterfront.

A large body of water can be seen beneath the bridge.
Add a photo to this gallery
Retrieved from "https://mortalkombat.fandom.com/wiki/Waterfront?oldid=334544"
Community content is available under CC-BY-SA unless otherwise noted.