This brutish and nightmarish part of Outworld is known as the Wastelands (also in full, the Wastelands of Outworld) or simply The Wastes. This location is a bleak and ruined landscape which is forever dominated by the night. The roadsides have and continue to serve as a battlefield, which gives a lingering feeling of spontaneous conflict. A catapult resided nearby which was the source of many deaths. Located here is the Falling Cliffs and the Sea of Blood.

This is what's left of Edenia, a once beautiful realm ruled by King Jerrod and Queen Sindel. After Shao Kahn's warriors defeated Edenia's warriors in ten consecutive Mortal Kombat tournaments, the Konqueror was free to invade Edenia and convert the realm as part of Outworld.

This arena made its debut in Mortal Kombat II and returned in Mortal Kombat: Shaolin Monks, where players meet - and rescue - a maskless Kabal and cross the Wastelands' gigantic, bloody lake called the Sea of Blood in order to progress further into the wastelands.

This arena returned as a stone fortress within the wasteland at war with another nearby tower in Mortal Kombat: Armageddon. The players start within the fortress' main gates, although opponents can be knocked through the gate down to the courtyard below, which contains five burning catapults being used in the war, which also work as death traps.

In Mortal Kombat (2011), the Wastelands are fought along a shoreline this time around displaying burning destruction and also old netherships on sea in the background. There appears to be several corpses of all shapes and sizes washed up along the shore.

The Wastes are believed to also be occupied by camps of Tarkatans.

The Wastelands in Mortal Kombat II.

The Wastelands of Outworld from Mortal Kombat: Shaolin Monks.

The Wastelands from Mortal Kombat: Armageddon.

Jade encountering Mileena in the Wastelands. 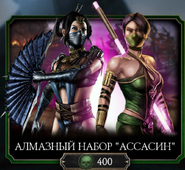 Cameo in MK11 as a Kombat Kard background.
Add a photo to this gallery

Retrieved from "https://mortalkombat.fandom.com/wiki/Wastelands_of_Outworld?oldid=331828"
Community content is available under CC-BY-SA unless otherwise noted.