A war hammer is a late medieval weapon of war primarily used for close combat action, whose design resembles the hammer.

Raiden owns an ancient War Hammer, which was introduced as his weapon style in Mortal Kombat 4 and Mortal Kombat Gold. It is one of his two mystical and eletrically charged weapons, the other being his staff.

Appearance wise, it is surprisingly quite simplistic looking very similar to a maul or a sledgehammer. In a way it also bears a resemblance to Shao Kahn's own Wrath Hammer, but as stated before being simpler in comparison. Although by Deception, Raiden's War Hammer would get a redesign.

Earthrealm's god of thunder, Raiden used this as his weapon of choice. When joining his chosen defenders of Earthrealm to aid in their fight against the fallen Elder God Shinnok and his Army of Darkness in a battle to save the realms once more.

After the heroes' battle against the evil master of the Netherrealm, Shinnok. Raiden placed his War Hammer at the top of his sacred Sky Temple in Earthrealm where it is safe until it is needed. It now acts like a lightning rod for the tower-like temple.

In Deception, thanks to the Sky Temple being introduced as a stage. Kombatants can take the Thunder God's hammer and use it against their opponents. Even till Mortal Kombat: Armageddon the War Hammer can still be found atop the Sky Temple.

In the same game, there is also another War Hammer located in the Armory stage that has a different design from the one in the sky temple. It can be picked up if a character isn't currently holding a weapon.

Sub-Zero thanks to cryomancy and tendency to create weapons out of ice. He can also make Ice War Hammers as a part of his arsenal and moveset. In MKX, they are used when picking the Cryomancer variation. The grandmaster of the Lin Kuei would continue to use his icy War Hammer in his appearance as a Guest Fighter for Injustice 2. With the game's customization system allowing him to have different designs, alongside his other weapons made of Ice.

Reiko would make use a variant of a War Hammer called the Crude Hammer, somewhat befitting someone whom wants to emulate Shao Kahn. 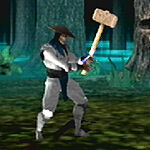 The War Hammer wielded by Raiden in MK4/MKG. 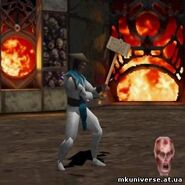 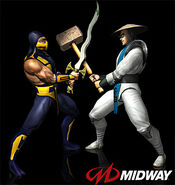 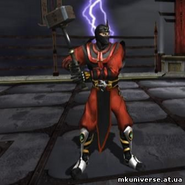 The War Hammer in the Armory in MK:A. 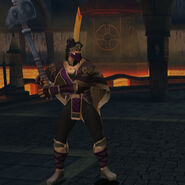