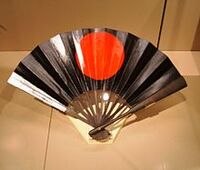 A War Fan is a fan designed for use in warfare and martial arts.

Kitana uses her fans in their closed state in a fight scene of Mortal Kombat: Annihilation.[1]

Kitana with her Steel Fans.