The War Banner is a weapon used by Baraka, first appearing in Mortal Kombat 11 as his weapon style, opposite his Tarkatan Blades. While the Banner itself can be placed on the fightline during gameplay, equipping specific Equip Abilities allow Baraka to utilize the Banner as a weapon during gameplay. Baraka also uses it during his Fatal Blow and plants it into his opponent at the end of the attack.

The War Banner is also featured in his Battle Cry Intro and his Baraka's Triumph Outro. It can also change its appearance through the game's Kustomization, ranging from different flags with different symbols and different flag poles with either symbols or charms on them or the pole being a spear. The color of the War Banner changes based on what color Baraka's current outfit is.

Concept Art of some War Banners. 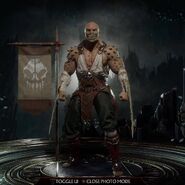 The War Banner beside Baraka

Render of one Baraka's War Banner

Another War Banner with a spear-like pole.

The War Banner that came alongside Baraka's Killer Croc skin.
Community content is available under CC-BY-SA unless otherwise noted.
Advertisement