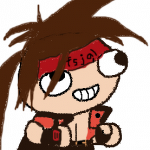 Hey, I'm Danny, I'm a big fan of MK. I played almost every game in the series. The only game in the series I don't like is MK vs. DCU. I mean, I still like it, it's just that it doesn't have any gore. I think that MK 2011 changed that. I like playing Mortal Kombat: Armageddon, cause of the character creation. I created Astorath from Soulcalibur, and thought, "This game is more fit to him."

Retrieved from "https://mortalkombat.fandom.com/wiki/User:Zombiekiller14?oldid=328253"
Community content is available under CC-BY-SA unless otherwise noted.