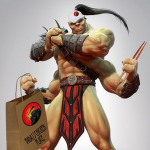 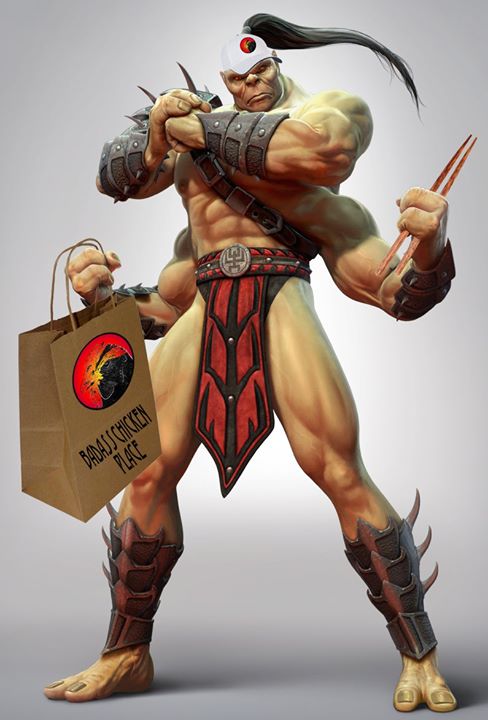 I've been a Mortal Kombat fan since 1992 when the first game came out. I remember playing it in the arcades and, soon after, playing it on my Sega Genesis.

It was so incredible. The game was so different than any other fighting game. The blood, the gore, the violence. All the aspects contributed to the awesomeness it offered. All of that was so revolutionary that it helped push the rating system of all video games. It was so crazy that it was banned in Australia.

The only other fighting game that was even remotely interesting at the time was Street Fighter II that I would play with a buddy at the neighborhood 7-11. And, of course, there was Pit Fighter that had the same kind of graphics that I would play at the local arcade. Once Mortal Kombat became available to me, that's all I played.

It kind of bothered me that the home version did not have blood in it and the Fatalities were turned off. But then, the sweetest word in Mortal Kombat history came. DULLARD. That's right. Down, Up, Left, Left, A, Right, Down. With the code in play, I, as a 10 year old, was amazed by the graphic graphics. It was amazing to be able to kill your opponent. Totally unreal.

If I didn't already think Mortal Kombat was great, suddenly, Mortal Kombat II came out the following year. I went crazy when I saw it for the first time at my favorite arcade. The game was more detailed and full of color. So beautiful. I couldn't wait till this one came out on the Sega Genesis. I didn't have to wait too long.

There it was, in all its glory. On my Sega Genesis. The same feel as the arcade but at home. It blew my mind that I didn't need a code to unlock the blood and gore. I got so excited that I had my mother see it. Looking back on it, I'm surprised that she was okay with it. I think she was more relieved that she didn't have to drive me to our local Buy Back Games store to get those cheats. I suppose that most people would assume that it was a weird thing to allow a child to have.

I was in Las Vegas for my aunt's wedding when I saw a magazine with Liu Kang on the cover when MK3 was announced. I was so excited. I read that article in that magazine over and over again. My mother sent me to our motel room, which was about a mile or so away. I was just so excited about the new game, I must have talked my cab driver's ear off. Of course, he was willing to listen to a twelve year old to keep him entertained.

I always felt that the movie was fantastic. I always felt that this movie was the best video game movie out there at the time. Still think so to this day. The story is so much like the story for the game and what the comic book came up with. The only thing I really didn't like was when they made Sub-Zero and Scorpion out to be a part of the Outworld Warriors. Scorpion should have been independent and made references to the Netherrealm. Sub-Zero should have been in an internal struggle between his selfishness and the good of Earthrealm. Not only that, Scorpion and Sub-Zero should have fought. Scorpion should have won that fight. Sub-Zero should have been killed by Scorpion and not by Liu Kang. I understand why they did it that way. I mean, it was more simple that way, after all. I know that they had the two be servants of Shang Tsung but they're not. They never have been. Regardless, it was a great movie. The story was actually really good.

When MK3 came out on console, I got it right away. The only franchise I have ever gotten during the release. This game felt like a revolution! What a cool game. It just felt like a step up from Mortal Kombat II, which is what it's supposed to be. Just the story in on itself was fantastic. My best friend and I fell in love with that game.

The first time I saw Ultimate Mortal Kombat 3 was in an arcade. I asked a random kid who just got done playing the game a question. "When did that come out?" He responded that it came out a couple weeks before that. I did find out that the "kid" was actually in his late teens and worked there. I said confusingly that Mortal Kombat 3 just came out a little bit ago. He just simply said, "But this is Ultimate Mortal Kombat 3". Like that actually meant something to me. I felt slightly cheated. I felt like I played only half the game and had to play this "plugg in" to get full satisfaction. It was my first introduction to the upgraded games, which would come after every official game after that. It just became a staple.

When Mortal Kombat Triligy came out, I was in hysterics. To see so many characters in one game was so crazy to me. It became my Mortal Kombat game of choice. I had a conversation with a friend of mine about the game. I think he was more amazed that there were so many characters in the game. He found it unbelievable that a disc for a game could have so much content. I simply understood it that it was the difference in technology. In actuality, it was just the next generation of video games. PlayStation really made some revolutionary things and so did Nintendo at the time.

I used to think that Mortal Kombat: Defenders of the Realm was a continuation of Annihilation. It would make sense but I was wrong. Too bad. It would have made sense. The characters and even the lack of characters were right for it. Anyway, this was a great series. I especially liked it that there was a group of people on the good side. Thinking about it, I think DotR was what Annihilation should have been. But, of course, it was a series that could afford to shoehorn all those characters and not a movie. Regardless, it was a pretty fun show. Wish there were more episodes.

It was about this time that Mortal Kombat: Annihilation came out. I was really hoping to see literally Mortal Kombat II as a movie. I mean, I know it was Mortal Kombat II but I'm talking about the game. I would have loved to see a live action Kintaro. I was really hoping for a great introduction to Shao Kahn and for Liu Kang to win the rematch tournament. I also would have loved to see Kung Lao. I understand that we did get Mortal Kombat: Conquest and had the Great Kung Lao but it's just not the same. Point is that we did not get the sequel we deserved. I felt like the writers shoehorned the characters into the movie and sacrificed the story.

Speaking of Mortal Kombat: Conquest, that was a pretty good show up until towards the end. The story was going so well with all the characters. I was so looking forward to seeing the fight between The Great Kung Lao and Goro. Of course, it didn't happen. They showed the Great Kung Lao fighting Shang Tsung though. That was pretty awesome. Too bad it was the beginning episode. Oh well, decent show anyway.

Another drastic change that actually didn't take into effect was Mortal Kombat: Special Forces. This adventure game was fun but I felt it fell short due to a small amount of characters. I do feel that it paved the way for Shaolin Monks though. Come to think of it, it also helped to introduce Konquest modes and the next three arena style games.

Mortal Kombat: Armageddon was so awesome. I really liked how you can create your own character. I would create characters that were not of huge pop culture references. Mustard Man from CKY4, White Hating C*** from Chasing Amy, the list goes on. Even some original characters like Tramp Olena. So much fun.

I did enjoy Mortal Kombat: Shaolin Monks. I liked that it was an alternate telling of Mortal Kombat II. I almost wish that it was considered canonical due to all the adventures Liu Kang and Kung Lao went on in that game. I still think it's too bad they didn't go on with a Scorpion and Sub-Zero spin off game.

Mortal Kombat vs. DC Universe was probably the most underappreciated game in Mortal Kombat history. It didn't surprise me that it was not a Mature game. Even though DC Comics is not exactly the most wholesome story out there, it surely is not horrific like Mortal Kombat. To me, it was no different than Street Fighter II but with better graphics. Who really cares that you couldn't see the Fatalities? I just felt that the point of these games is not the visuals but the action. In fact, they did a good job integrating the Mortal Kombat characters in a DC Comic thought process. I guess this was the final attempt at saving Midway.

When Midway filed for bankruptcy, I was crushed to think that Mortal Kombat may never have another game ever again. I was thinking how could it possibly survive? But then, of course, Midway sold everything and Boon retained those rights. Sweet!

This was the same time that Mortal Kombat was made into a proof of concept called Mortal Kombat: Rebirth. I really liked it. What got me was the semi-realistic character development. It reminded me of The Dark Knight.

Retrieved from "https://mortalkombat.fandom.com/wiki/User:Dragonspyne?oldid=352770"
Community content is available under CC-BY-SA unless otherwise noted.