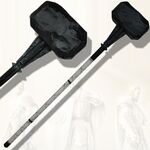 The Troll Hammer is a weapon used by Noob Saibot and Taven in Mortal Kombat: Armageddon. It appears as a large sledgehammer with its hammer head being made out of a stone slab, which is then attached to the handle with straps.

Noob's Troll Hammer.
Add a photo to this gallery

Retrieved from "https://mortalkombat.fandom.com/wiki/Troll_Hammer?oldid=360326"
Community content is available under CC-BY-SA unless otherwise noted.