This enchanted axe has been used by members of Nightwolf's Native American tribe for centuries. Now, Nightwolf uses this same ancient and enchanted axe as a weapon to battle his enemies and the evil spirits of other worlds.

Nightwolf as he is seen attacking Kano with his Tomahawk. 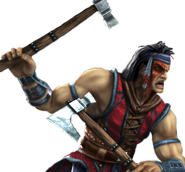 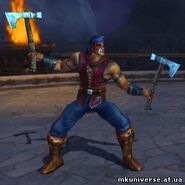 NightWolf using his Tomahawks in his X-ray.

Teaser image of Nightwolf carrying his Tomahawk in MK11.

Nightwolf about to throw his Tomahawk in his fatality.

The Tomahawk as a Konsumable.

Bloody Tomahawk at Tier X.
Add a photo to this gallery
Retrieved from "https://mortalkombat.fandom.com/wiki/Tomahawks?oldid=351553"
Community content is available under CC-BY-SA unless otherwise noted.