"Toasty!" is an Easter egg that was first featured in Mortal Kombat II.

It originated as an inside joke between members of the Mortal Kombat development team, and made its way into the game via an image of sound designer Dan Forden appearing in the lower-right corner of the screen, and saying "Toasty!" in a falsetto voice, when the player performed a particularly vicious uppercut.

On the Portal stage, if players pressed down and start while Dan's face was still on the screen, then they could qualify to face Smoke.

The "Toasty!" joke quickly became an element and reappeared in many places, such as in Mortal Kombat 4, where Dan Forden would say "Toasty 3D!" making a point of the fact that Mortal Kombat 4 was the first game in the series that utilized 3D graphics.

In Mortal Kombat: Deadly Alliance, if the player failed a minigame, one of the taunts could be "Toasty!"

It was also discovered in Shaolin Monks, where if the player pulled off a long chain of hits, that Dan Forden would say "Toasty!", but his picture would not appear. If the player pressed Down and Start while Dan was still talking, then they would be awarded with 1000 experience points. It has also appeared in Deception in two places. When playing Chess Kombat and putting the "Kill" spell on another player, Dan will say "Toasty!" on rare occasions. In Deception's Konquest mode, it can be used to advance into the story; to acquire the Earthrealm Kamidogu without obtaining the password first, Shujinko will try "Toasty" as the password and gain access.

According to Dan, when he and his co-workers played Super High Impact, he would say, "I predict toast!" (IE I predict you're going to lose!). Later, the quote turned into, "I predict toasty!". During the development of Mortal Kombat, one of the game designers suggested that Dan use it in the game.

Toasty is also the name of Scorpion's most famous Fatality. In Mortal Kombat II, a specialized Toasty Fatality can make Dan Forden say "Toasty!" after the Fatality with a text appearing that reads "Toasty!"

The Toasty exclamation bonus made a return in the ninth installment, Mortal Kombat, with Forden now wearing a gray shirt with a slice of toast with butter superimposed on it. A bonus called "Toasty Boost" is given to the player if a combination of buttons is tapped when Dan appears; when done correctly, the player will have a full X-Ray meter immediately [1].

One of Cassie Cage's fatalities in Mortal Kombat X has her taking a selfie with her opponent and posting it on Friendship social media. One of her friends is Dan Forden in his "Toasty" pose.

Toasty returns in Mortal Kombat 11. If players perform a strong enough uppercut on the Tournament stage, Forden (using his MK3 appearance) will briefly appear on the central monitor from the right side. It also heard from Scorpion's Crispy brutality if the player press the required secret buttons while in a brutality. The Toasty joke is also reference by Johnny Cage if the player choose Scorpion with Cage as the announcer's voice.

The Toasty entered into the internet realm in 2011 by the website Toasty It[2], in which visitors may pay homage to their favorite website in true Mortal Kombat II style. Simply by entering in the URL of the desired website, Dan Forden will grace the bottom corner of the chosen website singing that everlasting tune. This timely Easter egg has an Easter egg of its own, in which clicking on Dan Forden's image, Right Said Fred's "I'm Too Sexy" will start playing, with randomized MK characters breaking out in a flash dance. Reloading the page and clicking on Dan Forden's image will release a new MK character.

The song "Reptile " by the artist Skrillex based on Reptile's theme features this quote on occasion throughout the song.

The song "Been Fweago" by the rapper SpaceGhostPurrp also uses the quote on several occasions during the song.

The game "Peggle" also features Toasty, where an image of one of the Peggle Masters, Jimmy Lightning, will pop up along with a speech bubble containing the word "TOASTY!"

The song "Mortal Kombat High" by Starbomb features "Toasty!" in one of the verses. 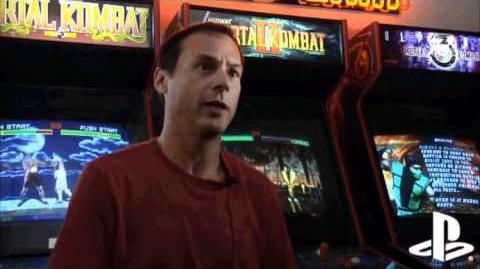 Mortal Kombat - The Origins of Toasty!
Dan Forden explains Toasty!
Add a photo to this gallery

Retrieved from "https://mortalkombat.fandom.com/wiki/Toasty!?oldid=330966"
Community content is available under CC-BY-SA unless otherwise noted.