The Thoraxe (Thor Axe) is a weapon that can be found in the Beetle Lair stage in Mortal Kombat: Deception. Its name is a pun on Thorax, which is part of an insect's body.

The Thoraxe would make a cameo in MK11 as the icon for a Poison Floor konsumable.

The Thoraxe is a large and long ancient scepter/axe found in The Beetle Lair shaped like an insect's abdomen, the thorax, with a red glow to it. It is seen in the inscriptions of a stone slab, in the hands of a mythical warrior demigod called the Death Knight, once worshipped within the Beetle Lair.

Cyanidium is a poisonous metal that drains the health of a kombatant. The Thoraxe, located in the Beetle Lair, is made of this same metal.

In the Baraka vs. Mileena video in Deception, once the fight was taken to the lower floor of the Beetle Lair, Baraka whom was knocked down into said floor decided to grab the nearby Thoraxe after getting up. However, in Mileena's ending, Baraka was killed despite trying to fight with it. (Although in Baraka's ending, it was revealed that it was just another Tarkatan, whom was sent out by Baraka to be his decoy.) 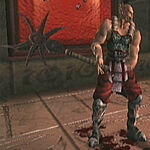 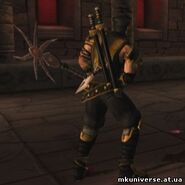 Baraka in kombat against Mileena with the axe. 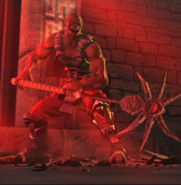 The Thoraxe being brandished by a Tarkatan

The Baraka Decoy, wielding The Thoraxe in Mileena's Deception ending

Concept Art of the Beetle Lair, showing off the Thoraxe and it's Previous Wielder.

The Executioner Axe Equipment Kard. Presumably based on the Thoraxe.

The Executioner Axe at Tier X. Now with a proper axe blade that has a glowing edge.

Cyanidium is a play on the poison Cyanide.