Shao Kahn had a temple constructed for himself within his palace during his invasion of Earthrealm.

The arena in Mortal Kombat 3 consists of lit red candles in the very front, stained glass embellished with the Mortal Kombat dragon in the back, lit skull torches, skull pillars and a fighting ground with Shao Kahn's head embellished in the center of the arena.

In Mortal Kombat (2011), a new 3D design of the Mortal Kombat 3 arena, now named The Cathedral, appears. In the background, Noob Saibot (sometimes), the Shadow Priests, and (what appears to be) Meat appear.

In the MK 2011 Story Mode, the Temple serves as a meeting place for Raiden and Earthrealm warriors during the Invasion of Earthrealm.

Based on the trailers of MK 2011, Rain was originally going to appear in this stage's background, but was removed because Rain is already scheduled for release as DLC.

The Temple from Mortal Kombat 3. 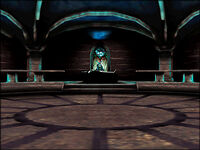 The Church in Mortal Kombat Gold.

Wallpaper of the Cathedral from MK 2011.

Noob lives in the Cathedral

The Cathedral in Mortal Kombat (2011)

Sonya and Mileena fight at the Cathedral

The Temple in MKX.

The Temple in MK11.
Add a photo to this gallery

Retrieved from "https://mortalkombat.fandom.com/wiki/The_Temple?oldid=331373"
Community content is available under CC-BY-SA unless otherwise noted.