The Brotherhood of Shadow

Worship of Shinnok
Conquest of Earthrealm
Destruction of the Elder Gods

The Brotherhood of Shadow is a faction in the Mortal Kombat video game series.

About the Brotherhood of Shadow

The Brotherhood of Shadow are an unholy, fanatic cult centered on the demon sorcerer Quan Chi and are worshipers of the fallen Elder God Shinnok. Its countless members are ever scheming and planning for his release from the Netherrealm. Its trademarks are stealth, secrecy and deception, and is involved with black magic and necromancy. They achieved their goal when Quan Chi was able to get hold of the sacred amulet needed to free Shinnok from his eternal prison, from where he already controlled the entire Netherrealm. Agents such as Noob Saibot and Reiko rose to prominence during the subsequent war with Princess Kitana, the people of Edenia, Raiden and his Earthrealm warriors during the events of Mortal Kombat 4.

Their joint effort ultimately failed, however, and Shinnok was defeated. In the events leading up to Mortal Kombat: Deadly Alliance and Deception, Noob Saibot began eluding Quan Chi's control and prepared for the creation of his own armies, while Sareena and Ashrah left the Brotherhood. With Shinnok eliminated as a presence to be reckoned with and Quan Chi's own plans with the Deadly Alliance, the Brotherhood seemed to have lost its importance, or at least be on hold. It appears that for most (former) members, their time spent with the Brotherhood was merely a catalyst for more important things to come. It was later revealed in Mortal Kombat: Armageddon that Sareena is working again with the Brotherhood of Shadow, albeit under a spell from Quan Chi. This story is also revealed through her released bio from such game.

At the heart of the Brotherhood of Shadow's fanatical religion is these diabolical zealots' very desire to bring about the day when the malevolent Elder God Shinnok is finally and completely set free from the dark depths of the Netherrealm, and his will is done. They'll stop at nothing to achieve their insidious, Utopian dream of being at the right hand of their divine master and creator, and thus forever rule all creation itself.

The first storyline appearance of the organization comes in the form of three deadly assassins: Sareena, Kia and Jataaka. Jataaka and Kia were defeated by the elder Sub-Zero, but Sareena is strangely spared by the Lin Kuei warrior. She later appears to help Sub-Zero in defeating Quan Chi. Although the duo achieved victory, it is cut short by Shinnok, who "kills" her with a bolt of energy.

Noob Saibot is the first member of the Brotherhood of Shadow to ever appear in the series, operating in the shadows under command of Shinnok, keeping track of the events of Outworld's tournament.

Noob Saibot appears once more, apparently having set a "base of operations" in a dark lit area known as Noob's Dorfen. It is during this time he is an active member working outside the Nethrrealm, under orders of Shinnok to align himself with Shao Kahn, during the Outworld emperor's invasion of Earth, while also secretly aiding Earthrealm's warriors in defeating Shao Kahn.

Another member of the organization, Reiko, makes his debut. Sometime before the events of the game, Tanya, a close ally of the Brotherhood of Shadow, had been enlisted into the clan as a double agent, pretending to be a close ally of the Earthrealm warriors.

Before the events of Deadly Alliance, Noob Saibot appeared in the war between Edenia's new Shokan forces under leadership of Goro and Kitana as well as Shao Kahn's diminished army. He ambushes the weary Goro and fatally wounds him. Meanwhile, Sareena resurfaces and defects from the Brotherhood of Shadow, meeting up with the younger Sub-Zero, now Grandmaster of the Lin Kuei, pledging her servitude to the newly reformed clan, indebted to the older brother's strange compassion towards her.

While he is no longer a member of the Brotherhood of Shadow, Noob Saibot allies with Quan Chi, who is gathering fighters to the Forces of Darkness for the Battle of Armageddon. Quan Chi knows that the realms are in the brink of destruction, so he casts a deadly spell upon Orin, Taven's guardian dragon, in order to try preventing him into putting a halt to his plans. The sorcerer orders Kia, Jataaka and the controlled Sareena to kill Taven. Taven defeats Kia and Jataaka, but was unaware he freed Sareena from Quan Chi's control. The sorcerer has formed an uneasy and distrustful alliance with fellow villains Onaga, Shang Tsung and Shao Kahn.

Minions of the Brotherhood, still under the command of Shinnok, appear here, a small group hiding in secret in the Living Forest. They are depicted as jet-black skinned humanoid demons, wearing black uniforms with their insides glowing blue or green (depending on the version of the game). They have the ability to melt into a shadowy form that makes them invulnerable to every form of attack, sans a Multality. They attack their opponents wielding sickle blades with deadly skill and agility. They are the most vulnerable when solid.

A Brotherthood member, as he appears in Mortal Kombat Mythologies: Sub-Zero. 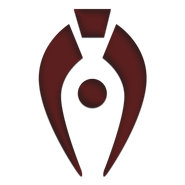 The Brotherhood of Shadow logo, as it appeared in the original timeline.
Español Português Русский
Community content is available under CC-BY-SA unless otherwise noted.
Advertisement