Fight against the Lin Kuei

The Tengu Clan is a clan that appears in Arctika as a rival clan to the Lin Kuei. They wear similar clothes, but in orange instead of blue. They made their first appearance in Mortal Kombat: Armageddon.

In the Konquest mode, the Tengu Clan attacks Taven, mistaking him for one of the two outsiders: Noob Saibot and Smoke, who had earlier attacked his men near the obelisk. Wu Lae, the leader of the Tengu, asserts that he thought Taven was a member of the Lin Kuei, a rival clan of which the Tengu share an uneasy truce with. He continues by saying that they reside in a temple close by, and warns of their in-hospitality. 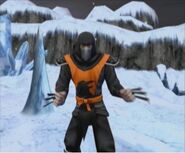 Tengu Grunts' Concept in MK: Armageddon
Add a photo to this gallery
Retrieved from "https://mortalkombat.fandom.com/wiki/Tengu?oldid=330870"
Community content is available under CC-BY-SA unless otherwise noted.