All full-blooded Tarkatans are born with an organic weapon on their arms: these are the Tarkatan Blades. They span approximately four feet. Baraka uses them in all of his Mortal Kombat appearances to perform all his special moves, as well as quickly slicing through all who stand in his way. The signature weapon of the Tarkatan race first made its debut in Mortal Kombat II, and later was featured as a collectible Relic under the name "Baraka's Blade" within the Konquest mode of Mortal Kombat: Armageddon.

They are made into his weapon fighting style in Mortal Kombat: Deception, and remain that in Unchained and Armageddon. In those three games, every time Baraka starts a round after losing the previous one, if he's laying with his back to the ground, he will lift himself extracting the blades, causing them to be his first fighting style in the next round, instead of Silat.

Erron Black is able to use a detached Tarkatan blade in Mortal Kombat X, exclusively in his Outlaw variation, fashioned from a severed and skeletal Tarkartan arm, making him the first non-Tarkatan character in the series to use one. He makes use of the Tarkatan blade like a sword with the skeletal arm being the handle.

In addition, a guest character in Mortal Kombat X, the Alien, has retractable blades in its arms. This is because Xenomorphs take on the DNA traits of whatever species they impregnate; this particular Xenomorph was born from a Tarkatan. Unlike typical Tarkatan Blades, however, the Alien's are segmented.

In his return as a playable character in MK11, Baraka would have his Tarkatan arm blades as a customizable Gear Item. With many type to choose from, ranging from arm blades made up of organic bone to those of seemingly made from metallic material.

The savage Tarkata later use their blades in the animated series Mortal Kombat: Defenders of the Realm, and the second movie, Mortal Kombat: Annihilation.

Baraka with Blades in comics. 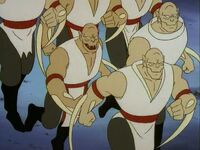 The Tarkata with their Tarkatan Blades in Mortal Kombat: Defenders of the Realm. 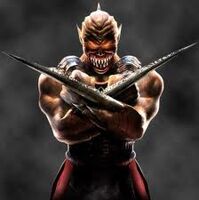 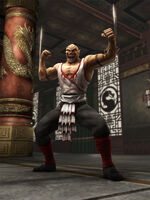 Baraka with his Tarkatan Blades in Mortal Kombat: Shaolin Monks. 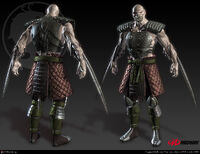 Baraka's blades as seen front and back.

Baraka's blades in MK vs DC. 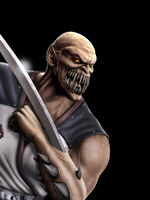 Erron Black's Tarkatan Blade sword on his back in his ending.

Erron's Tarkatan Blade on his back in Jax's ending. 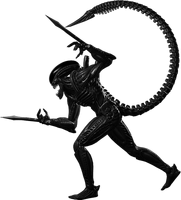 Alien with its blades.

A severed Tarkatan Arm with blade as a Consumable in MK11