The Tarkata, also known as Tarkatans, Mutants, and Nomads, are a brutal species of warriors situated in Outworld.

Previously, The Tarkata were an interspecies breed of warriors. They were considered a mix of a humanoid race from Outworld and a demonic race from the Netherrealm.

However, this has been changed in the new timeline, as Baraka tells D'Vorah in Mortal Kombat X that his realm was conquered by Shao Kahn. This could suggest that the Tarkatans are from their own realm and not a fusion of Outworld and Netherrealm inhabitants as previously established.

They are often depicted as unintelligent, bloodthirsty brutes that serve the currently most powerful leader. However, more recently, they have been depicted as more intelligent, Baraka knowing that the meeting Mileena had scheduled with him in the ancient Beetle Lair was a trap and sent another Tarkatan in his place. As well as this, in his Mortal Kombat 2011 ending, he is able to detect the scent of Shang Tsung in the form of Shao Kahn, leading him to kill the impostor and allow Shao Kahn's forces to claim Earthrealm.

According to Mortal Kombat, all Tarkatan males joined Shao Kahn's army once they came of age and survived the brutal Ritual of Blood. Among the ranks present within their armies included that of an Enforcer. Tarkatan females appear in Mortal Kombat 11.

In Jade's Deception ending, it was revealed that it is possible to gather concentrated Tarkatan essence and seal it within a container. When the container is shattered near a person, the nearby Tarkata enter into an uncontrollable frenzy as they believe the person with the essence as a rival male.

The Tarkata also have a unique language, which is commonly spoken between them. Non-Tarkatans who know their language include Raiden and Skarlet.

They are well known for their combat prowess throughout Outworld, Sheeva recognizing that "there is no victory without the Tarkata."

The Tarkata play a prominent role in the invasion of Earthrealm initiated by Shao Kahn. The Tarkatans are bolstered by arms supplied by Kano's Black Dragon guild, and are able to easily overwhelm Earthrealm's defenses.

The Tarkatan are seen again in Mortal Kombat X during the story mode.

Flashbacks to five years ago reveal when Mileena was Empress, several Tarkatan accompanied her to confront Kotal Kahn and his fellow insurgents against her rule, with Baraka along side her. The Tarkatans attack after Mileena orders them to kill those conspiring against her. In the end, they are defeated, with their leader, Baraka, being viciously executed by D'Vorah.

Even after Mileena's deposing, the Tarkata remain fiercely loyal to her. During the present events of the story, Mileena and her allies (Tanya and Rain, who freed her from prison) ambush Kotal Kahn's forces with hordes of Tarkatans. Upon Mileena's signal, the Tarkatans storm the Outworld Marketplace, first targeting Kotal's allies (D'Vorah, Erron Black and Ermac) who ruthlessly kill them. Mileena paid for Kano to kill Kotal, hoping to not be forced to unleash her ultimate weapon: the Amulet of Shinnok, acquired by Kano in exchange for gold. After Kotal defeats Kano & Tanya, he is attacked by two more Tarkatans. Then, he spots Mileena, Rain and other Tarkata on the roof of a building. Having grown fed up, he transports there. Mileena is surprised but orders the Tarkatans to attack. Though, Kotal slays them effortlessly.

In the interim between the end of the Outworld Civil War, Kotal Kahn had all of the Tarkatans killed in retribution for them supporting Mileena's attempted coup. When Baraka, who was brought from the past to the present by Kronika, discovered this, he was enraged, though Kronika promised to restore his species as she set history back on its rightful course. Kronika fulfilled this promise by displacing the Tarkatan Kamp to the present timeline. Though Baraka and his Tarkata initially supported Shao Kahn as the emperor sought his throne back, they eventually sided with Kitana after she swore the Tarkatans would receive better treatment if they sided with Kotal Kahn. The Tarkata would join Kitana and the Shokan in storming Kronika's Keep.

Their most distinctive physical traits are their long, sharp teeth, large mouths, and blades protruding from their bodies, especially their arms. Baraka is their leader, and it's revealed Mileena is a half-Tarkatan clone as well, with this heritage owing their devout loyalty to her in the current timeline. The Tarkata are a nomadic species, mainly populating Outworld's wastelands, but it's discovered that they come from the Netherrealm and migrated to Outworld. This race possesses a love for battle and serves whoever is in command (Shao Kahn, the Deadly Alliance, etc.).

In Mortal Kombat vs DC Universe, Shang Tsung's ending indicates that the sorcerer was both impressed and angered by Captain Marvel defeating him. Using his magic, he mixed the blood on a torn piece of Captain Marvel's cape with that of a Tarkatan warrior creating a horrific race of Super-Tarkata that would be loyal to Shang Tsung.

The Tarkatans first appeared alongside Baraka in Mortal Kombat: Annihilation. They are seen wearing cloaks, with the exception of Baraka himself, who disposes it in favor of preparing a battle against Liu Kang.

The Tarkatans are also featured in the webseries Mortal Kombat: Legacy, and while still retaining their bloodthirsty demeanor and trademark blades, their distinctive teeth seem to have been toned down. They are shown invading the realm of Edenia, led by their general, Baraka.

Sub-Zero surrounded by hordes of Tarkatans in his Deception ending.

Baraka and his Tarkatan army in his Deception ending.

A group of Tarkatans attacking Tanya after Jade shattered a container of their essence on her, driving them into a frenzy.

Bo' Rai Cho along with other members of Outworld fighting the Tarkatans in his Deception ending.

Super-Tarkatan in the non-canon MK vs DCU as seen in Shang Tsung's ending. 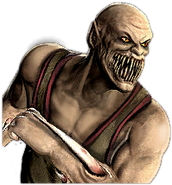 Baraka about to battle Jax in story mode. 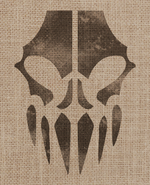 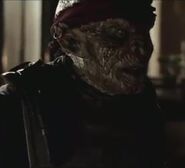 A nervous female Tarkatan speaking her native language after being confronted by Jade and her troops.

Retrieved from "https://mortalkombat.fandom.com/wiki/Tarkata?oldid=340605"
Community content is available under CC-BY-SA unless otherwise noted.