A Tanto ("短刀" "Short Sword", or "Dagger") is the smallest sword carried by the samurai, meant for close quarters combat. It is also used in seppuku, the ritual suicide used to regain honor through death, also known in Mortal Kombat as Hara-Kiri.

In Mortal Kombat 11, it is seen above Scorpion's katana in his waist. Skarlet uses them as well, however they received an update in appearance, as well as seemingly being made from blood, or at least able to be conjured from blood during her intros. 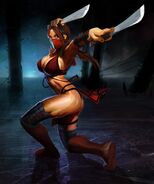 Scorpion with his Katana and Tanto

Scorpion's Tanto in MK11
Add a photo to this gallery

Retrieved from "https://mortalkombat.fandom.com/wiki/Tanto?oldid=330666"
Community content is available under CC-BY-SA unless otherwise noted.