The Tang Soo Do or Tangsudo (당수 도 or 唐 手 道 or taŋsudo, "the art of the slash / knife") is a traditional martial art of Korea. It is focused on the discipline and practice of forms and sequences of self defense. Hwang Kee, founder of this art, claimed to have developed it from ancient texts on subak (an older Korean martial art) while living in Manchuria in the 1930s. Okinawan and Japanese Karate, as well as internal Chinese martial arts have left influences in it. Tangsudo is similar in many aspects to Karate Do and Taekwondo. 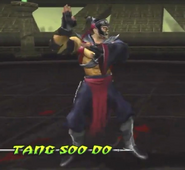 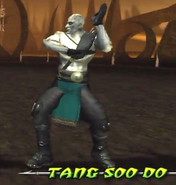 Quan Chi's Tang Soo Do
Add a photo to this gallery

Chuck Norris, the famous martial artist and actor, learned Tang Soo Do while in the military in Korea.

Demonstration of Tang Soo Do

Retrieved from "https://mortalkombat.fandom.com/wiki/Tang_Soo_Do?oldid=334109"
Community content is available under CC-BY-SA unless otherwise noted.