This article is about the character in Mortal Kombat: Conquest. For other character with the name Sub-Zero, see Sub-Zero (disambiguation).

J.J. Perry
Sub-Zero is a character in the television series Mortal Kombat: Conquest. He was played by J.J. Perry and introduced in the episode "Cold Reality".

Sub-Zero was a assassin trained to use cryomancy by Lin Kuei. At a certain point, he was hired by Shang Tsung to defeat Kung Lao and retrieved from his home a magic crystal that had the ability to transport its keeper to other dimensions.

He were later forced into a partnership with Scorpion on orders from Shao Kahn, who believed that the combined strength of the two fighters would finally result in the death of Kung Lao after their individual failures. The alliance quickly dissolved when Peron, Scorpion's partner, killed Lisa, Sub-Zero's sister, while Sub-Zero killed Peron to avenge the death of his sister.

Sub-Zero also killed a Lin Kuei Grandmaster who attempted to bar him from meeting his original family from before his Lin Kuei days. Not only did these events turn Scorpion and Sub-Zero against each other in a stalemate battle, but the icy warrior was forced to become renegade, abandoning his clan. He turned down an offer by Kung Lao to join him in the fight against Outworld.

By the end of the series, Sub-Zero is shown to be killed by Shao Kahn's warriors, but due to the show's cancellation, it is unknown if any of them are really dead as the producers mentioned the last episode was supposedly going to be just a dream, leaving Taja's ultimate fate unclear. 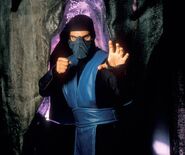 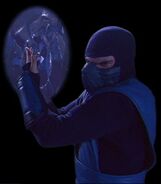