About the Stunt Men

Only very little is revealed about Stunt Man from MK 2011. He appears to be jealous of the fact that Cage is always in the spotlight. He is so desperate for a lead role he attempts to defeat Cage on two occasions in the Challenge Tower for tabloid recognition and a chance to star in Cage's movie.

Not much is known about the Stunt Double from MK11 as well. He is however named Jim, and appears to at least slightly resemble Johnny. Wearing clothes very similar to Johnny's MK4 appearance (but with boxing tape wrapped around his fists), having a a poorly drawn "Johnny" Tattoo on his chest seemingly made using a marker and also has visibly lighter shade of hair. (Almost similar to Johhny's hair color from Deadly Alliance and Armageddon)

Some of Johnny's abilities concerning the Stunt Double include; "Jim" running across the screen then deck Johhny's opponent with a massive clothesline or put them in a Full Nelson to give Johnny a chance to get a free hit. The stunt double is also used for the Team Cage Brutality. 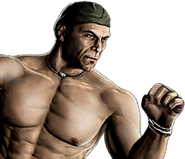 The Stunt Double about to grab Baraka.

The Stunt Double standing victorious beside Johnny after the Brutality.
Add a photo to this gallery
Retrieved from "https://mortalkombat.fandom.com/wiki/Stunt_Man?oldid=351986"
Community content is available under CC-BY-SA unless otherwise noted.