The Storm Sword is Rain's weapon of choice in Mortal Kombat: Armageddon. It is a single-edged curved sword made of bronze and has the logo from his cape etched into the blade itself. It also has a tusk as its pommel. 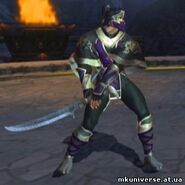 Krypt Koncept art of the Storm Sword. With Rain wielding two of them.
Add a photo to this gallery
Retrieved from "https://mortalkombat.fandom.com/wiki/Storm_Sword?oldid=351617"
Community content is available under CC-BY-SA unless otherwise noted.