A Staff is a long stick used as a support when walking or climbing or as a weapon. With many martial arts fighting styles and variants based on it.

Raiden's Staff also known as Staff of Raiden and occasionally the Stave is the mystical weapon of choice by the Earth's thunder god Raiden. This wooden staff was given to him as a gift long ago from the Elder Gods, and is made of a special kind of wood that can withstand electrical shocks. The staff has been his main weapon style in Mortal Kombat: Deadly Alliance, Mortal Kombat: Deception and Mortal Kombat: Armageddon.

Raiden's staff appears to be based on the Japanese bō staff, or the Chinese chang gun staff.

At one point, Raiden gave Kai the weapon (in Kai's MK4 ending), that it could show him the ways to immortality and in Deception, Kai gives the staff to Shujinko for Kung Lao, that way he can rebuild the White Lotus.

In Mortal Kombat X, Raiden's staff is rather metallic in appearance (no longer being made of wood). Raiden makes use of the staff in his Conducting Rod fatality. With the last attack of the fatality having Raiden use his Staff as a lightning rod to fry the opponent. As shown in MKX's Story Mode, the staff also has spikes on it's end, that are sharp enough to be used to stab a Demon.

Raiden's staff reappears in Mortal Kombat 11, as a Stave. It is Raiden's main weapon of choice and is thus also a customizable gear item, used in many of his moves including his Fatal Blow, and is a Krypt key item.

Bo' Rai Cho uses Jojutsu as his weapon fighting style in all of his appearances in Mortal Kombat: Deadly Alliance, Deception, Unchained and Armageddon. Thus is usually carrying a Jo staff, although in MKX his Jo Staff would be replaced with a cane.

One of the many weapons used by the Monk enemies in Mortal Kombat Mythologies: Sub-Zero is a staff.

Raiden offering his Staff to Kai in the latter's ending.

Raiden about to use his Staff in a Fatality. 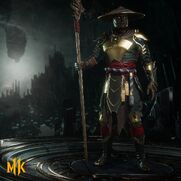 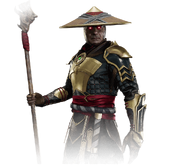 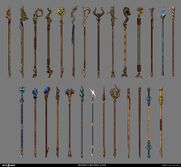 Raiden holding his Staff and the Book of Destiny