Special moves are sometimes borrowed from one character to be given to a secret character. This is most easily seen in Reptile who originally could use Scorpion's spear throw attack and all of Sub-Zero's moves. Moves among the ninjas were also shared with the characters Smoke and Noob Saibot.

Originally, special attack button sequences were kept secret in the game, similar to fatality button sequences, and required some experimentation and luck to find and master. However, these codes generally remain unchanged between games (for example, Scorpion's spear throw has always been some variation of the back-back-low punch sequence). More recently however, developers have added lists of basic combos and special moves in the pause menu of games. These lists are not available during online matches.

In Mortal Kombat (2011), all special moves can be enhanced using one third of the super meter. Doing so will enhance the damage of the special move slightly, or increase it's effectiveness. For example, Sub-Zero's enhanced Ice Beam attack increases the duration of the freezing effect. Scorpion's Teleport Punch adds an extra strike at the end of the punch for more damage. These moves are often used to set up and finish combos, as well as increase the amount of damage performed in the combo, without increasing the number of moves. 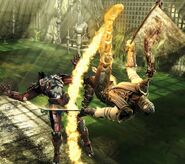 Add a photo to this gallery
Retrieved from "https://mortalkombat.fandom.com/wiki/Special_Moves?oldid=311348"
Community content is available under CC-BY-SA unless otherwise noted.