The Soul Tombs are a location in the Realm of Outworld. It is also a level featured in Mortal Kombat: Shaolin Monks.

Within that realm, pain and suffering have a terrible purpose. Those individuals who perish there have their souls as well as their very essence captured and placed within the Soul Tombs. It was a large palace that was accessible through the Portal with a large number of guards present within it and it is indeed built like a prison. An Orochi Hellbeast was also present which was risen from its chamber when intruders entered the tombs.

There are many Tarkatans, Masked Guards and putrid corpses in the area as well as Shadow Priests. As seen in one of Smoke's missions of the Soul Tombs, it also has its very own torture room.

They were said to have been the source of Shang Tsung's power which was why Raiden asked Liu Kang and Kung Lao to destroy them. When inside the Soul Tombs, they both discovered Shang Tsung was there regaining his youth and recharging his powers before they destroyed the strange machine that restored him and is part of the tombs, guarded by the Shadow Priests after he disappeared.

The Soul Tombs are where both Liu Kang and Kung Lao also go up against Baraka who served as the boss of this area.

There is a certain room on Shao Kahn's Fortress called the Soul Chamber which its design was also based on the Soul Tombs itself.

Liu Kang and Kung Lao battles the Tarkata at the Soul Tombs. 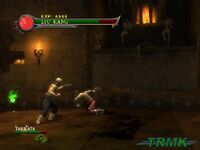 A torture room within the Soul Tombs.

Kung Lao and Liu Kang enters the chamber inside the Soul Tombs.

Baraka, who served as the Soul Tombs boss in Mortal Kombat: Shaolin Monks, gets ready to fight Kung Lao.

Liu Kang fights Baraka in the Soul Tombs.
Add a photo to this gallery
Retrieved from "https://mortalkombat.fandom.com/wiki/Soul_Tombs?oldid=229883"
Community content is available under CC-BY-SA unless otherwise noted.