Snake Fist, often referred to in English as Snake Style or Snake Kung Fu, is a name given to two unrelated northern and southern Chinese martial arts which imitate the movement of actual snakes. Different schools imitate different movements of snakes; some, for example, imitate the cobra, while others imitate the python, while some schools imitate both for different applications. The fluid motions of the snake allows the user to entwine with their opponents in defense and strike them from angles they wouldn't expect in offense. This style lends itself well to the study of the Chinese straight sword and spear.

Snake is one of the archetypal Five Animals of Chinese martial arts; the other four being Crane, Tiger, Leopard, and Dragon. These five animals originally represented the five classical Chinese elements before developing into their own styles. The snake represented the element of water. Snake style is based on whipping power which travels up the spine to the fingers. The ability to move sinuously, essentially by compressing one's stomach/abdominal muscles, is very important. Although footing is quite grounded, the stancework is fluid in order to maximize the whipping potential of any movement. This necessitates building a strong spine to contain the power and strong fingers to convey the strike. Snake Fist generally aims for weak points of the human body, such as eyes, groin and joints.

There is also an obscure southern Snake Fist developed during the first half of the 1900s. The style is best described as a mid-distance fighting style, using some Wing Chun-like techniques in Hung Gar-like forms. This attests to the Southern Shaolin origin of this style and its close relationship to other styles originating from Southern Shaolin. The force and techniques of Snake Fist are softer than traditional southern styles. Besides straight punches and bong shou as widely used in Wing Chun, this style also employs butterfly-buddha palms, the hook, upper cut, and the back fist as central techniques. Biu ji (thrusting fingers) techniques resembling snake attacks give their name to this style. 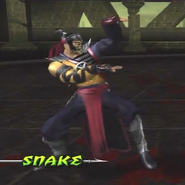 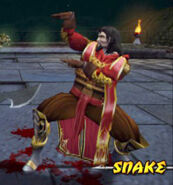 Shang Tsung's Snake
Add a photo to this gallery

Retrieved from "https://mortalkombat.fandom.com/wiki/Snake?oldid=310770"
Community content is available under CC-BY-SA unless otherwise noted.