Smoke's Facemask is a metallic mask that was made and is worn by the ninja warrior Smoke. This mask made its first appearance in Mortal Kombat: Deception, replacing Smoke's Helmet from Mortal Kombat 3. The mask later reappeared as a collectible Relic named Smoke's Mask within the Konquest mode of Mortal Kombat: Armageddon.

Smoke wore this rather odd looking mask before he was automated into a cyborg by the Lin Kuei Clan, this very mask covers his more delicate features and even his identity as well.

Smoke was not always a cyborg: he was originally human and clearly a most skilled ninja with expertise in stealth and theatricality as shown in both Mortal Kombat 3 and Mortal Kombat: Shaolin Monks before his ordeal with the Lin Kuei clan themselves.

In the movie Mortal Kombat: Annihilation, Smoke appears with his cybernetic helmet in his cyborg ninja form to find Liu Kang and to capture Princess Kitana, in order to keep her apart from Sindel. However, Smoke is stopped by Sub-Zero, who reveals that Smoke was originally after him before being reprogrammed by Shao Kahn. Sub-Zero does not state anything else of their past connections if they existed in the movie storyline.

Curiously, Smoke was basically a silver-colored (rather than violet blue-colored unlike his MK3 appearance) version of Sektor in the film, as he was able to shoot missiles from his chest. Smoke's arsenal in the games included a three-pronged harpoon that shot from his chest, but no missiles. He did, however, exhibit one ability unique to his movie incarnation - being able to disintegrate into a moving cloud of smoke and re-form at will - which he used in a successful sneak attack on Liu Kang and Kitana.

In the animated series, Mortal Kombat: Defenders of the Realm, Smoke appeared in one episode (titled "Old Friends Never Die"), serving Shao Kahn and seeking Sub-Zero. He is briefly seen in human form in a flashback scene before becoming automated. In the end, Smoke's human soul was able to overpower his programming and he stood to the vow of friendship between him and Sub-Zero. Many fans consider it to be the best episode in the short-lived series. Sub-Zero and Smoke during their days at the Lin Kuei as seen in Mortal Kombat: Defenders of the Realm.

Smoke makes a brief appearance in his human form during the ending of one Mortal Kombat: Conquest episode, following Sub-Zero's betrayal of the Lin Kuei. Smoke is called upon by the clan as the next warrior to be sent to hunt and kill the traitor, at which point he emerges from a mist as a faint, grey figure with glowing red eyes. However, his appearance was not further elaborated on in later episodes as the series was canceled soon after. His appearance was elaborated in the fiction "Mortal Kombat: Conquest Aftermaths Part 1", where he faces Sub-Zero in a battle. 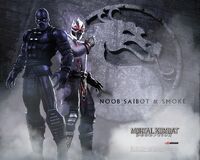 Smoke as he is seen wearing his mask while standing next to Noob, forming the alliance Noob-Smoke. 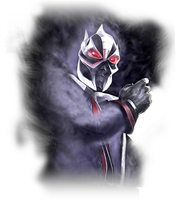 The ninja Smoke in his original human form, wears his own different mask in Mortal Kombat: Shaolin Monks.

Smoke with his different facemask in Mortal Kombat (2011). 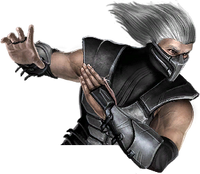 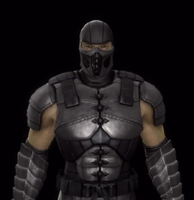 Smoke's Facemask in his Alternate Costume. 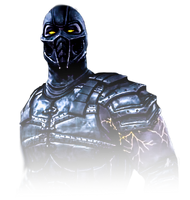 Revenant Smoke in MKX, wearing his Alternate Costume and its facemask.