The Sky Temple was a large tower-like temple located in Earthrealm.

The Sky Temple, located in Earthrealm, serves as a place of meditation for Raiden. The roof of the Sky Temple is adorned by his War Hammer, which behaves much like a lightning rod. The Sky Temple is 1,666ft (approximately 507.8 meters) tall.

The Sky Temple is a multi-level tower that premiered in Mortal Kombat: Deception and reappeared in Mortal Kombat: Armageddon. Kombatants would start off on the tower's roof, where they had the option of wielding Raiden's War Hammer as an arena weapon. From any side of the roof, a kombatant could push their opponent over the edge and onto a lower balcony.

On the lower balcony, were three sides from which a kombatant could again push their opponent—this time, to their deaths as they plunge to the ground far below. Once they hit the ground, they snap to pieces and their head hits the screen, then falls back and squirts blood.

The Temple makes its comeback in Mortal Kombat X. This version of the stage has a more sinister appearance with statues and a tornado in the background.

When some characters are pushed into the death trap, they will stop screaming long enough to utter out some last words.

The Sky Temple features four arena interactions. From farthest left to right they are: 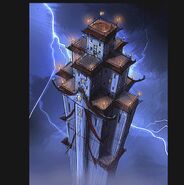 Raiden's War Hammer at the roof of the Sky Temple.

Sky Temple's cameo appearance in Injustice 2.
Add a photo to this gallery

Retrieved from "https://mortalkombat.fandom.com/wiki/Sky_Temple?oldid=338615"
Community content is available under CC-BY-SA unless otherwise noted.