watch 03:19
Wiki Targeted (Games)
Do you like this video?
Play Sound

The Skulls are fiery, floating Hellspawn phantoms in the form of giant skulls (their namesake) that are the Sub-Bosses that made an appearance in the Konquest mode of Mortal Kombat: Armageddon.

To prevent the Edenian demigod Taven from advancing, the ninja spectre Scorpion sent the Skulls to face him, but they were defeated. To defeat these undead demons, Taven could only use projectiles since each Skull remained distant. 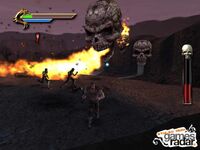 Taven battles both the Hellspawns and the Skulls.
Add a photo to this gallery

Retrieved from "https://mortalkombat.fandom.com/wiki/Skull?oldid=353537"
Community content is available under CC-BY-SA unless otherwise noted.