Siang was once a powerful fighter that becomes his own character when Sing and Sang fuse together to create an awesome warrior of the Order of Light. They were defeated quickly by Goro who tore the warrior apart, in effect, tearing the two brothers out of their combined body.

When Sang died from the forceful separation, Sing chose to fuse with him one last time, never to come apart again. Seeking retribution, he snuck into Outworld and challenged Shao Kahn, who used an item known as the Deathstone to control him, making him an unwilling servant of the emperor. Siang confronted Liu Kang and Bo when they entered Outworld, but was stopped by the appearance of Raiden, Johnny Cage and Jax. Defeated, Siang told Liu Kang his tale, as they were once brethren and Siang respected his fellow Shaolin Monk.

Liu offered Siang a chance to redeem himself, to join the forces of light and help defeat Shao Kahn. He agreed, though when the combined fighters for good crashed the emperor's wedding to a mind-enslaved Sonya Blade, the emperor used the Deathstone once more to force Siang to fight for evil.

When the sides were drawn, evenly matched, Shao Kahn proposed a new tournament to be held in Outworld. He teleported both sides away, commanding that whichever side reached a Dragon Medallion would win. Siang ended up in a hollow, dark place along with Scorpion. Scorpion sensed the chaos within Siang, and asked to hear his story. Having previously been gifted with the Deathstone by Shao Kahn, Scorpion, in a bout of mercy, grants Siang release by destroying the Deathstone and killing him. It is not revealed why Scoprion chooses to do this, as the Deathstone was the key to the undead armies of Shao Kahn that he himself was the general of, though it may be because Scorpion considered himself more neutral and sought only revenge against the original Sub-Zero and did not wish to become entrenched in the affairs of Outworld and of Shao Kahn. 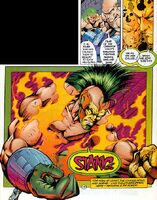