They are also the ceremonial relics of the Shokan race as well.

Sheeva used these as her weapons to kill her enemies in the name of her Shokan heritage just her people's mighty ruler, Prince Goro, who once wielded these same ceremonial daggers as weapons as well.

As Konquest mode items, the daggers look different than in-game, rather resembling Kira's Dragon Teeth. In Armageddon, Sheeva's stance is similar to Kira's weapon stance, as well as Kano's, but the moveset for the weapon is completely different. 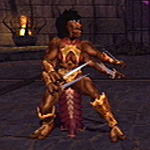