These spiked armor shoulder pads are part of an ancient Shokan Armor, a war uniform worn by the tiger-like Shokan named Kintaro. This armor first originally appeared in Mortal Kombat II, and later reappeared, both with an updated version of itself, and also as one of the collectible Relics named Kintaro's Armor within the Konquest mode of Mortal Kombat: Armageddon.

Kintaro, who came from a tiger-like bloodline within the four-armed half-human, half-dragon Shokan race of Outworld, wore this armor in battle as he crushed his foes in the name of his Shokan heritage, and in his services as a royal bodyguard to Shao Kahn, Emperor of Outworld. 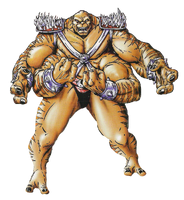 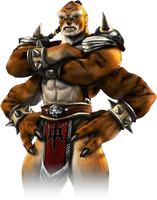 Kintaro with the updated Shokan Armor in Mortal Kombat (2011).

Kintaro seen coming towards Kung Lao while his Armor is seen on his shoulders.

Another look at Kintaro's armor. Consisting of pauldrons, wristbands and kneepads.