The Shokan, or sometimes referred to as the Shokans, are a mighty race of half-human, half-dragon warriors that live in the subterranean kingdom of Kuatan in Outworld.

The Shokan are large creatures that dwarf Humans in size and boast incredible strength. As a composite species, they combine the traits of dragons and Outworlders alike, resembling oversized muscular humans with dragon-esque eyes, forked lizard-like tongues, reptilian scales (mostly located on the back), four arms whose hands have only three digits each, with black fingernails, and only two digits (big toes) on each foot, also with black toenails. Shokan from the Tigrar class, most notably Kintaro, also boast tiger-like stripes, fur, whiskers, and other feline features.

Their civilization and society is structured under a monarchy with a king and queen ruling their people and representing Kuatan's concerns to Shao Kahn. Their heir is usually a prince in line for the throne. In Mortal Kombat: The Journey Begins, it's shown that multiple heirs to the throne must compete with one another and demonstrate their ruthlessness by fighting to the death. The victor thus becomes the ruling crown-prince who will eventually inherit the throne. Furthermore, on a single particular day, it was customary to give the King a present.

Among the Shokan, there is one rule that surpasses all others: survival of the fittest and most ruthless. Kindness is forbidden in the Shokan race.

At least two distinct Shokan racial variations have been identified: the royal Draco and the lower-class Tigrar lineage. Goro and Sheeva are from the Draco lineage while Kintaro is of the Tigrar.

For millennia, the Shokan loyally served Outworld's Kahn, Shao Kahn. One of their kind would always serve in some high capacity within Kahn's empire. They would usually face competition with the Centaurians for this role but they maintained it for generations.

One Shokan, Goro, would be chosen to serve as Outworld's champion in the Earthrealm Mortal Kombat tournaments. It was at his hands that Earthrealm's former champion, the Great Kung Lao, died.

After Prince Goro's supposed death following Liu Kang's first Mortal Kombat victory, Kintaro would take this role in Outworld but he too was defeated. This would be the start of their fall within Shao Kahn's eyes and their status was reduced during the invasion of Earthrealm with Motaro serving as a general, while Sheeva served as a bodyguard for Queen Sindel.

In the events immediately preceding Mortal Kombat: Deadly Alliance, Princess Kitana would be instrumental in forming an alliance with the armies of the Shokan. With the Edenian forces, they fought against Shao Kahn's forces, commanded by the dangerously adept Kano.

Years later, during the time of the Deadly Alliance, the united Edenians and Shokans marched on Shao Kahn's weakened army. Goro was exhausted from battle and was struck from behind by Noob Saibot. He was mortally wounded, apparently dying from the injury. So, Princess Kitana held and attended a royal funeral for her former ally. However, Goro was able to survive, being saved from death by Shao Kahn himself, with the promise to return the Shokans to their former glory and banish the Centaurians in exchange for his allegiance. Agreeing to these terms, Goro placed his royal seal on a nearby fallen disfigured Shokan (whom Kitana and the other Shokans found and mistook for him) and resumed his place at Shao Kahn's side. He (along with Shang Tsung) aided Shao Kahn in reclaiming his stronghold and his throne as the emperor of Outworld. In Mortal Kombat: Armageddon, Goro is confronted by the half-god Taven in Shao Kahn's Fortress, as the latter wishes to kill Quan Chi but must get past Goro in order to do so. Taven eventually defeats Goro, who storms off.

The Shokan also own the Cobalt Mines, a huge mining facility and prison in Outworld. They make an appearance in the television series Mortal Kombat: Conquest.

Known Members of the Shokan

A crystal konsumable in MK11 with the Shokan emblem carved onto it.

Kintaro, the Shokan of Tigrar-lineage in MK 2011

Grum, a six-armed Shokan from the comics.

The Kombatant, an artificially-created Shokan from the comics.

The Shokan vs The Centurian in the official Mortal Kombat IV comic book. 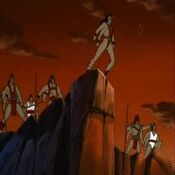 The Shokans in Mortal Kombat: DoTR. 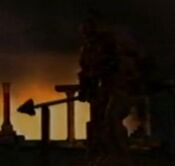 Kintaro leading an army of Shokans.

Add a photo to this gallery
Retrieved from "https://mortalkombat.fandom.com/wiki/Shokan?oldid=356861"
Community content is available under CC-BY-SA unless otherwise noted.