Shaolin Fist is a translation of the Chinese Shaolinquan, what is most commonly referred to in English as "Shaolin Kung Fu". It was said to have been developed within the 7th century C.E. in the Tang dynasty with the earliest description being the defense of the Shaolin monastery from bandits. Various legends are associated with the development of the "Shaolin Fist" including the legend of Bodhidharma, a wandering Buddhist monk, and the Yellow Emperor or Huang Di, one of the legendary founders of China. Currently, Shaolin Kung Fu is popular internationally beginning with the depiction in movies by the actor/martial artist Bruce Lee in the 1960s, followed by further movies and television shows that center around the Shaolin temple.

Shaolin Fist is used by Kung Lao in Deadly Alliance and Armageddon, and also by Shujinko in Deception. 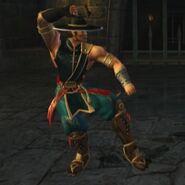 Retrieved from "https://mortalkombat.fandom.com/wiki/Shaolin_Fist?oldid=262047"
Community content is available under CC-BY-SA unless otherwise noted.