The statue is made in the image of Shao Kahn the Konqueror, himself, and evidently has a small amount of Kahn's personality as it uses several of Kahn's threats and boasts. The statue is extremely strong, capable of killing with a single blow if it directly connects with a punching fist ground attack.

Immune to any normal attacks, the statue may only be harmed by releasing the power of four magical orbs that are located in the room. All four must be struck with a projectile attack in order to be activated. When this is accomplished and the statue is in the center of all four, a plate in the floor must be activated by the ground strike technique. The orbs then release their energy on the statue, causing it damage. 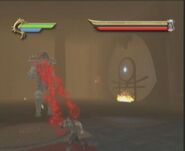