Shao Kahn's Throne Room is located within his stronghold in Outworld. It was a very similar to the arena Kahn's Kave.

The Konqueror's throne room sits at the top level of his stronghold. Shao Kahn's Throne is designed to swivel so that he can look out of the 2 eye holes on the huge exterior skull helmet. The ceiling has retractable panels.

This throne room is quite different from the one that is a grand hall with spiked pillars and a stone throne at the end of the hall, and where Shao Kahn was supposedly killed at the hands of two treacherous sorcerers Quan Chi and Shang Tsung in Mortal Kombat: Deadly Alliance.

In Mortal Kombat vs. DC Universe, Shao Kahn's own throne room becomes merged with Darkseid's throne room, and therefore takes a completely new look. This merged throne room is the game's final level in both its Arcade Mode and Story Mode. Not only does each side of the arena have its own lower area accessible by Free Fall Kombat, but you can smash through the separating wall between them via Test Your Might.

Shao Kahn's Throne Room also appears in Mortal Kombat (2011), complete with a TaiGore, a pet for Shao Kahn. While players are fighting, Kahn taunts and laughs at the losing player.

Shao Kahn's throne room takes a whole different look in the TV series Mortal Kombat: Conquest. It is still located at the top of Shao Kahn's Palace where the Emperor of Outworld resides, and used to be where the battle between the Great Kung Lao and the emperor's royal sorcerer Shang Tsung took place and viewed by a crowd in Shao Kahn's presence.

The Konqueror's own throne room is also found with a whole differnet look at Shao Kahn's Castle in the animated series Mortal Kombat: Defenders of the Realm. The throne room is located at the top of one of the castle's claw-like towers, and is in a shape of a dome-like chamber with balcony-like ramps surrounding the throne and a glass ceiling. It is where Shao Kahn holds his courts here as well. in the episode "Resurrection", his Shadow Priests brought the skeletion of the Emperor's once favored sorcerer Shang Tsung and used their magic to bring him back to life. Also in the series finale "Overthrown", Princess Kitana led a failed insurrection against Kahn into the throne room of his castle, before at last, Shao Kahn and his Shadow Priests escaped, and the castle itself was no longer of use to him anymore.

Shao Kahn's Throne Room in the background in MKD and MKU. 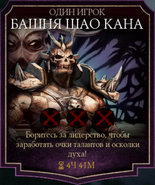 Shao Kahn's Throne Room in MK mobile
Add a photo to this gallery
Retrieved from "https://mortalkombat.fandom.com/wiki/Shao_Kahn%27s_Throne_Room?oldid=315260"
Community content is available under CC-BY-SA unless otherwise noted.