The origin and initial purpose of the Flesh Pits have never been truly explained, and is thus subject to speculation. It is known, however, that they were used to create creatures, likely to do Shang Tsung's bidding. They may have also been used as a source of limitless souls for the Shang Tsung; Souls which, due to his rapid aging, he needed to devour in order to maintain his youth. Thus, it is possible that the pits were a source of both powerful minions and "livestock" (for lack of a better term) for the sorcerer, This practice may also have been extended as a privilege to Shao Kahn.

The only known characters who emerged from the pits and fought in Mortal Kombat were Meat (who was originally a secret skin in Mortal Kombat 4 and was then later transformed into an official character in Mortal Kombat: Armageddon), Mileena (confirmed in the second portion of her biography concerning the 2011 Mortal Kombat video game), and Skarlet (an enforcer of Shao Kahn created by mixing warrior blood and sorcery). Another creation was the Flesh Pits Mutant, one of Shang Tsung's failed Flesh Pits experiments which guarded the souls in the Krypt.

In an alternate timeline of events, a possible outcome led to Reptile turning against Shao Kahn and slaying him. Afterwards, he forced Shang Tsung to use his Flesh Pits to restore the Raptor race. After many agonizing attempts, he succeeded in creating the broodlings that were loyal to Reptile and eventually they stormed Outworld; slaying every Tarkatan, Shokan, and Centaur who stood in Reptile's way.

The Krypt Monster or Flesh Pits Mutant as a failed Genetic Experiment emerged to guard the souls in the Krypt. 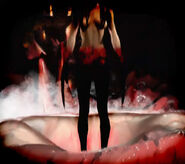 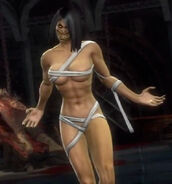 Skarlet, a Genetic Experiment emerged as a Shao Kahn enforcer.

Cameo in MKX as a Kombat Kard background
Add a photo to this gallery
Retrieved from "https://mortalkombat.fandom.com/wiki/Shang_Tsung%27s_Flesh_Pits?oldid=338311"
Community content is available under CC-BY-SA unless otherwise noted.