View source
watch 02:05
Wiki Targeted (Games)
Do you like this video?
Play Sound

The Shadow Assassins were a group of warriors modified by Smoke that served Noob Saibot.

Those members of the Shadow Assassins were shadowy ninjas with glowing red and blue eyes hinting their supernatural origins. They were said to resemble the warriors of the Lin Kuei clan. Some of their numbers were transformed Humans who were subjected to the nanotechnological powers of Smoke as well as to the dark magical powers of Noob Saibot. Their powers allowed them to appear from foggy smoke allowing them to suddenly appear and ambush their foes. They were typically armed with maces and knives. In addition to this, they were capable of shooting out red skulls through dark magic at their enemies.

A Shadow Assassin's upon his finished transformation. 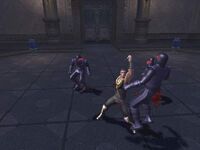 Taven battles against the invading Shadow Assassins in the Lin Kuei Temple.
Community content is available under CC-BY-SA unless otherwise noted.