Sergeant is a non-playable character in the Console versions of MKX but is playable in the Mortal Kombat (Mobile Game). He is a Bronze rarity level character that is of the Spec Ops type.

The Sergeant is a grizzled-looking Special Forces member, wearing a dark gray urban camo jumpsuit, black combat gloves, a black, bulky Kevlar vest with numerous ammo pouches placed on the front with a walkie talkie on the top left of the vest, a duty belt on his waist, two holsters with pistols in them on his thighs and black combat boots.

He has brown hair applied into a crew cut.

A Special Forces soldier with a very similar appearance to Sergeant can be seen piloting a helicopter containing Johnny Cage, Sonya Blade, Kenshi, as well as several soldiers towards Raiden's Sky Temple.

Johnny discusses the landing zone with "Sergeant". During the flight, the helicopter is attacked by Scorpion, who throws his spear into the face of "Sergeant" piercing his skull, immediately killing him, then promptly dragging him through the cockpit window, before attempting to deal with Cage and Kenshi.

It is unknown if this pilot was Sergeant, although it is likely, due to the identical design. Even then there is the possibility of either sharing/recycling a model. 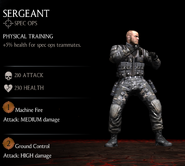 Sergeant In-game
Add a photo to this gallery
Retrieved from "https://mortalkombat.fandom.com/wiki/Sergeant?oldid=353435"
Community content is available under CC-BY-SA unless otherwise noted.