These ancient flags of Seidan design and origin written in an ancient Seidan language, are called the Seidan Guard Flags. They belonged to the military police force known as the Seidan Guard including their commander Hotaru from the highly advanced civilization of Seido, the Realm of Order. They first appeared in Mortal Kombat: Deception and one of them later reappears as another collectible Relic under the name Hotaru's Flag within the Konquest mode of Mortal Kombat: Armageddon.

These flags display the Seidan Guard's code of ethics and discipline. Adorning his shoulder blades, Hotaru wears these flags as a constant reminder to all those who inhabit the stable and perfect world of Seido, as well a warning to others of their impending doom should they ever come into conflict with order. 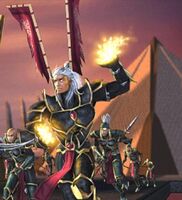 The Seidan Guard and their commander Hotaru.

Hotaru's Flag in Konquest.
Add a photo to this gallery

Retrieved from "https://mortalkombat.fandom.com/wiki/Seidan_Guard_Flags?oldid=292542"
Community content is available under CC-BY-SA unless otherwise noted.