A Scythe is an agricultural hand tool for mowing grass or reaping crops. It was largely replaced by horse-drawn and then tractor machinery, but is still used in some areas of Europe and Asia. Although not traditionally used as a weapon, it has on occasion been used for fencing.[1]

A scythe consists of a wooden shaft about 170cm long called a snaith, snath, snathe or sned (modern versions are sometimes made from metal or plastic). The snaith may be straight, or with an "S" curve, but the more sophisticated versions are curved in three dimensions, allowing the mower to stand more upright. The snaith has either one or two short handles at right angles to it — usually one near the upper end and always another roughly in the middle. A long, curved blade about 60 to 90 centimeters (24 to 35 in) long is mounted at the lower end, perpendicular to the snaith. Scythes always have the blade projecting from the left side of the snaith when in use, with the edge towards the mower. In principle a left-handed scythe could be made, but it could not be used together with right-handed scythes in a team of mowers, as the left-handed mower would be mowing in the opposite direction.

A scythe blade is made by peening the leading edge of the blade. In some uses, such as for mowing grass, the blade-edge is made almost as thin as paper. After peening, the edge is finished and subsequently maintained by very frequent stropping or honing with a whetstone or rubber (fine-grained for grass, coarser for cereal crops), and peened again as necessary to recover the fineness of the edge.

The "American" scythe blade is not usually peened as part of sharpening, being made using a stamping process that produces a harder blade than other styles of scythe blade. The harder blade is more difficult to draw out the edge with peening.

Using a scythe is called mowing, or often scything, to distinguish it from mowing with more complex machinery. Mowing is done by holding the top handle in the left hand and the central one in the right, with the arms straight, the blade parallel to the ground and very close to it, and the body twisted to the right. The body is then twisted steadily to the left, moving the scythe blade along its length in a long arc from right to left, ending in front of the mower, thus depositing the cut grass to the left. Mowing proceeds with a steady rhythm, stopping at frequent intervals to sharpen the blade. The correct technique has a slicing action on the grass, cutting a narrow strip with each stroke – a common beginner's error is to chop or hack at the grass, with the blade length at right angles to it, thus trying to cut too wide a strip of grass at once. This is much harder work, and is ineffective. Cutting too close to the ground can contaminate the blade with soil, rapidly blunting it. Much of the skill is in keeping the blade close to the ground and the cuts even. Mowing is normally done cutting out of the uncut grass, the mower moving along the mowing-edge with the uncut grass to their right. The cut grass is laid in a neat row to the left, on the previously mown land. Each strip of ground mown by a scythe is called a swathe (pronounced /ˈsweɪð/: rhymes with "bathe") or swath (pronounced /ˈswɒθ/: rhymes with "Goth"). Mowing may be done by a team of mowers, usually starting at the edges of a meadow then proceeding clockwise and finishing in the middle. Mowing grass is easier when it is damp, and so hay-making traditionally began at dawn and often stopped early, the heat of the day being spent raking and carting the hay cut on previous days.

Mowing with a scythe is a skilled task, performed with relative ease by experienced mowers, but often poorly and with very great effort by beginners. Long-bladed traditional scythes with double-curved wooden snaiths are harder to use at first, but once mastered are more effective and comfortable for longer periods. Shorter-bladed or hack-scythes are easier for beginners. A skilled mower using a traditional long-bladed scythe can even cut very short grass, and this is how lawns were maintained until the invention of the lawnmower.

In addition to mowing grass and reaping crops, a scythe can also be used for mowing reed or sedge, remaining effective even with the blade under water.

According to the Dictionary of Greek and Roman Antiquities of Sir William Smith, the scythe, known in Latin as the falx foenaria (as opposed to the sickle, the falx messoria), was used by the ancient Romans; for illustration, Smith shows an image of Saturn holding a scythe, from an ancient Italian cameo.

According to Jack Herer and "Flesh of The Gods" (Emboden, W.A., Jr., Praeger Press, NY, 1974.)[2]; the ancient Scythians grew hemp and harvested it with a hand reaper that we still call a scythe.

The scythe was invented in about 500 BC and appeared in Europe during the 12th and 13th centuries. Initially used mostly for mowing grass, it replaced the sickle as the tool for reaping crops by the 16th century, the scythe allowing the reaper to stand rather than stoop. In about 1800 the addition of light wooden fingers above a scythe blade produced a form of scythe called the cradle which soon replaced the simple scythe for reaping grain and mowing other tall vegetation such as reeds. In the developed world, all of these have now largely been replaced by motorized lawnmowers and combine harvesters.

The Abbeydale Industrial Hamlet in Sheffield, England is a museum of a scythe-making works that was in operation from the end of the 18th century until the 1930s.[3] Other English scythe-making districts include that around Belbroughton.[4]

Mowing with a scythe remained common for many years even after most mowing became mechanized, because a side-mounted finger-bar mower (whether horse or tractor drawn) cannot mow in front of itself. Scythes would therefore be used to open up a meadow – to mow the first swathes, thus letting the mechanical mower in to complete the mowing.

The scythe is still an indispensable tool for farmers in developing countries and in mountainous terrain.

In Romania, for example, in the highland landscape of the Apuseni mountains, scything is a very important annual activity, taking about 2–3 weeks to complete for a regular house. As scything is a tiring physical activity and is relatively difficult to learn, farmers help each other by forming teams. After each day's harvest, the farmers often celebrate by having a small feast where they dance, drink and eat, while being careful to keep in shape for the next day's hard work.

Among Basques scythe-mowing competitions are still a popular traditional sport, called segalaritza (from sega: scythe). Each contender competes to cut a defined section of grown grass before his rival does the same.

The Norwegian municipality of Hornindal has three scythe blades in its coat-of-arms.

The scythe also plays an important traditional role, often appearing as weapons in the hands of mythical beings such as Cronus, and the Four Horsemen of the Apocalypse, specifically, the Grim Reaper (Death). This stems mainly from the Christian Biblical belief of death as a "harvester of souls."

A war scythe has had its blade transformed so that it extends upright from the staff, and is used much like a halberd. It was widely used by Polish peasants (kosynierzy) in the 18th and 19th centuries.

After the Peasants' Wars during 1524-1525, a fencing book edited by Paulus Hector Mair described in 1542 techniques how to fence using a scythe.[5]

In Mortal Kombat: Conquest, the Scythe Guards who are the ruthless and merciless bodyguards of Quan Chi's nightmarish traveling circus called the Festival of Death, used these scythes as their own weapons to punish anyone who gets in the way of both the Festival, as well slaughtering fresh victims in stealing their souls in the circus' continuing service to their master. The Scythe Guards look almost strikingly similar to Shao Kahn's loyal Shadow Priests.

In Mortal Kombat: Armageddon's Konquest Mode, the leader of the Tengu Clan Wu Lae uses a scythe as his weapon.

The Fallen Elder God Shinnok uses a bone scythe in Mortal Kombat X, when making use of his Bone Shaper Variation. A bone scythe is also an available stage interactable in Shinnok's Bone Temple in MK11.

After her reintroduction in MK11, Skarlet uses her mastery of Blood Magik to create a Blood Scythe which she uses in some of her moves and in her Fatal Blow. 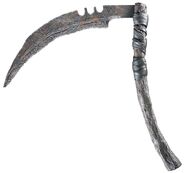 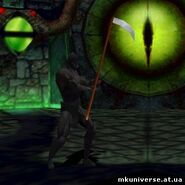 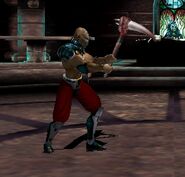 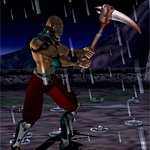 A Pair of Bloody Scythes as a Konsumable.

Noob's Scythe in MK11 as a Konsumable

The Scythe in Shinnok's Bone Temple

One of Baraka's War Banners with a scythe-like blade on the pole.