Bridge
This arena, known as the Lost Bridge, also called Scislac Busorez, consists of a bridge with a large bluish-purple portal in the background. This is in fact a combination of the levels Pit II and the Pit III, with the portal being taken from the Ultimate Mortal Kombat 3 "Choose Your Destiny" background.

The unlockable characters, Classic Sub-Zero, Ermac and Mileena are fought in this stage as well as Human Smoke when played as. When all three characters are unlocked, this arena is unlocked in the normal stage reel as the first arena to be loaded in the game.

This background also reappeared in Mortal Kombat Trilogy. In the N64 version of that game, Blaze and Hornbuckle randomly appear on the Pit II bridge in the background.

In Mortal Kombat: Armageddon, the blue portal appears along with the Evil Tower where players can knock their opponents down a nearby flight of stairs to an outdoor section of the arena, featuring a death trap portal that players can utilize. 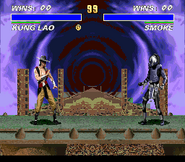 Blue Portal's Death Trap in Armageddon.
Add a photo to this gallery
Retrieved from "https://mortalkombat.fandom.com/wiki/Scislac_Busorez?oldid=325569"
Community content is available under CC-BY-SA unless otherwise noted.