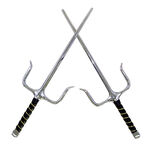 Sai are weapons used by various ninjas. Sai are a very specific type of dagger. It is a traditional melee weapon used in Okinawa. The basic form of the weapon is that of a sharp metal prong with two curved sideprongs (yoku) projecting from the handle (tsuka). There are many different types of sai with varying prongs for trapping and blocking.

Mileena is the traditional and famous user of the Sai blades in the series. Using them in pairs as a handweapon, she also uses them as projectiles in some instances. The Sai are frequently, if not always included in her Fatalities. In Mortal Kombat X, Mileena's Piercing Variation causes her Sais to glow pink. Additionally, the variation itself is designed to utilize the Sais in an offensive manner as compared to her other variations, gaining different basic attacks, combos and special attacks utilizing her Sais. While in her Ethereal Variation, she is capable of teleporting to her Sais that she has thrown at different distances in the arena, using them in both an offensive and defensive manner depending on how she uses them.

Kitana uses one of Mileena's Sais in Mortal Kombat 11. While she never uses it in the Story Mode, she does use it during gameplay. Equipping the Half-Blood Stance Equip Ability allows Kitana to access different attacks using Mileena's Sai, including gaining Mileena's Tele-Kick. Kitana can also throw three Sais upon using Edenian Fade.

The Sais also appear as a modifier in the Towers of Time, where Mileena throws them from off-screen. The Sais themselves are covered in green energy and if they successfully hit the opponent, the opponent's controls will be reversed for some time with the exception of their Fatal Blow, Throws and the use of interactables.