Sabre Teeth are four weapons used by Kintaro in Mortal Kombat: Armageddon. They are similar to the Dragon Fangs used by Goro, a gauntlet-like grip with a singular long tooth-like claw extending past the hand. Concept art of the weapon can be found in the game's Krypt. Which shows that the weapon was supposed to have two claws instead of one.

Kintaro would be seen with this weapon in the New Timeline while leading his Shokan-Oni army in the Mortal Kombat X Comic Series.

A single bloodied Saber Tooth attached to Kintaro's severed hand is a Krypt Kollector item in MK11, named as the "Shokan Saber Teeth". 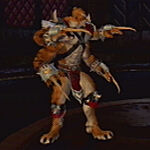 Kintaro with his Saber Teeth in the MKX Comic series.
Русский
Community content is available under CC-BY-SA unless otherwise noted.
Advertisement